Best Parks In Dallas For a Picnic Escape

pack some snacks and head into the Big-D 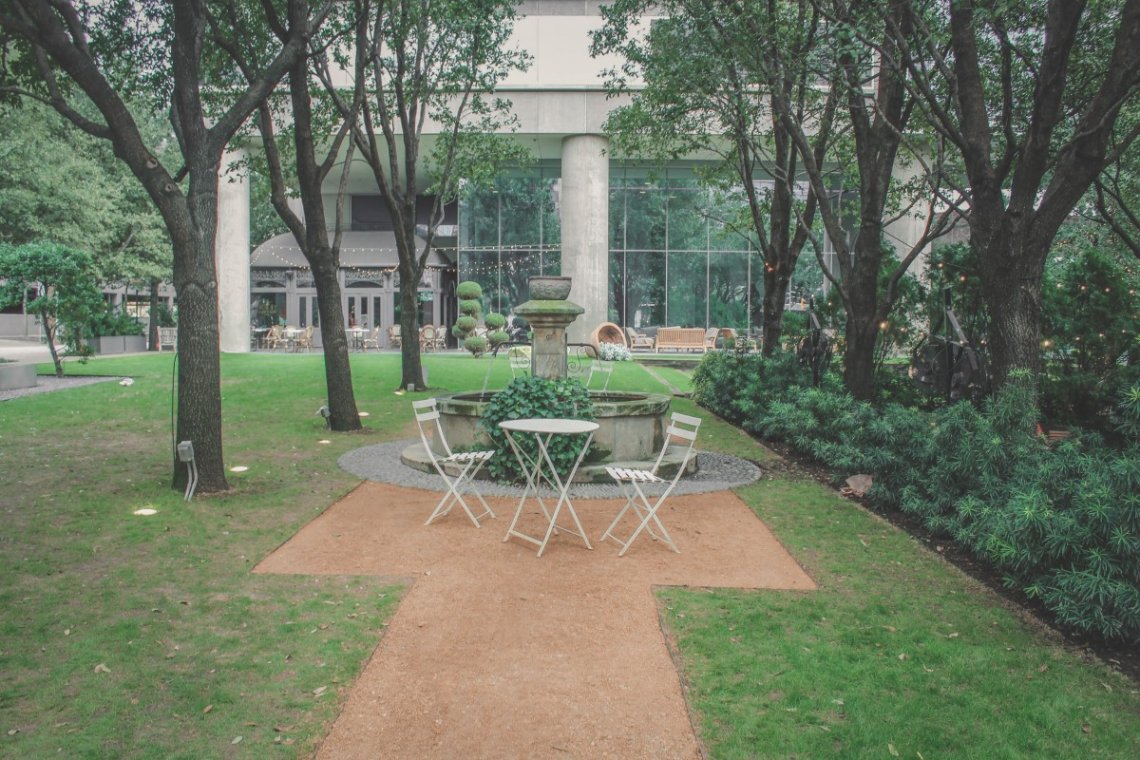 Here are the best parks in Dallas for a weekend picnic escape.

When you think of Dallas, Texas, you think of big buildings. You think of buildings so high, they seem like they’re lifting up the clouds. The trees and grass and green are lost under a blue-gray sea of offices and banks and shops and parking garages and restaurants.

But over the past five years of living in Dallas, there are a few spots that I find myself in, on an off-weekend or evening, with a picnic brunch for two (my go-to: cucumber sandwiches, cheese, summer rolls, watermelon slices, sweet tea).

It’s this part of Dallas that I look forward to most on warm weather days, when the sun is up and high. My husband, Vyas, and I love exploring the best parks in Dallas (it’s a chance for us to catch up, unwind, and relax).

So without further ado, here are our favorite parks in Dallas, Texas.

Lakeside Park is one of the most romantic parks in Dallas. It looks like a scene straight out of a fairytale. Tall trees. A waterfall. Flutters of leaves. Lilypads stretched out onto the nooks of a reflective lake.

Situated near Highland Park (where most of the popular residential parks in Dallas are located), along Turtle Creek, Lakeside Park is split into multiple walking paths. The paths split and split again (the most popular detour is Teddy Bear Park, one of the cutest parks in Dallas).

The best time to visit Lakeside Park is between March and July (the waterfall is shut off in the winter months) when the flowers are in full bloom and the lawns are the most manicured.

If you drive further down, you can hit William B. Dean Park and follow Turtle Creek Trail to Turtle Creek Park (lots of stone bridges and shallow brooks).

One of the most popular parks in Dallas, Klyde Warren is always buzzing. It’s an urban park right in the heart of the Dallas Arts District.

Just a few steps away, you’ll find the Dallas Museum Of Art (DMA), Crow Collection (one of my personal favorites), and the Nasher Sculpture Center. Most weekends, you’ll see food trucks lined up right along the where the park meets Woodall Rogers Freeway.

But if you’re looking to explore the best parks in Dallas on a budget, you can always pack your own bites and set up at one of the many tables around the park!

Klyde Warren is also an events hotspot. There are concerts, hosted walks, lawn movies, and morning yoga sessions throughout the year. It’s a community place.

Flippen Park might be one of the tiniest parks in Dallas but it’s also one of the prettiest. It’s a small lot of land in a neighborhood of homes with big wings and even bigger front lawns.

If you’re looking for a park in Dallas to snap a few photos, the gazebo at Flippen Park is gorgeous. The park takes under twenty minutes to explore (the gazebo can be reserved for weddings if you’re a Highland Park resident).

But if you’re planning on reading a book along the gazebo bench and peeking outside at the petunias, you could easily spend an hour (or more) here. The park is close enough to Highland Park Village to walk to (if you’re in a window-shopping mood) but far enough out to remain secluded and quiet.

The best time to visit Flippen Park is in winter. The gazebo is dressed in wreaths and red bows and streamers.

Dragon Park is one of the best-kept secrets in Dallas. It’s a beautiful space. But with a few off-limits signs stacked against the back fence, it feels almost wrong to visit.

And that’s the whole idea. It’s what makes Dragon Park one of the most unique experiences in Dallas.

Although it’s small (backyard sized), you’ll feel a rush of different emotions all-at-once as you wander past the cast-iron gazebo, lion statues, and myth-inspired landscape.

Read This Post
Things To Do In Bishop Arts District - Where To Eat, Shop, and Stroll

P.S. The transition period between spring and fall is the best time to visit.

P.P.S. This park is privately owned by Mark Mahan of Select Salon across the street. When you visit, you might see a small sign with a phone number that says call-to-visit. If you want, you can call ahead to ask if it’s okay to poke around.

Of all the parks in Dallas on this list, White Rock Lake is our hands-down favorite (it’s actually my dad and mum’s favorite too).

In a lot of ways, White Rock Lake feels like a beach. It doesn’t have sand or a boardwalk but it has that same sea wind-in-the-hair vibe. And after a busy week in Dallas, that feels like heaven.

You’ll see a lot of people biking at White Rock Lake. Joggers stick mostly to the grass and hug the side of the roads while running.

If you have a small dog, you can bring it along! White Rock Lake Dog Park is a small sub-park within White Rock Lake and it’s one of the most dog-friendly parks in Dallas (it actually holds the title of the first established dog park in Dallas).

Every year in the fall, Fair Park in Dallas hosts the State Fair of Texas, a crazy slew of livestock shows, out-of-the-box menus (every combo of fried food imaginable), wine samplings, concerts, and rides.

During the rest of the months, you can catch musicals like Dear Evan Hansen or explore the mainstay attractions.

There’s always something going on in Fair Park. The grounds are huge (over 200 acres) but I mostly flit between the two museums in the area (and grab a picnic lunch out of the car around noon).

Read This Post
10 Things To Do In Uptown Dallas

Although the Dallas Arboretum isn’t technically a park, it’s still one of the best places for a picnic lunch in Dallas.

The gardens change seasonally so this is a great spot to visit any time of the year (in the summers, they have a Thursday concert series that I love).

The Arboretum goes full-out for its design.

In the spring, they showcase over 200,000 tulips. In the fall, they make a storyline out of close to 100,000 pumpkins (the theme changes yearly). During the holidays, they set up a little Christmas village with more than a million lights.

This is the most extra place in Dallas but I love it for that very reason. Admission is $15 per person (parking is an additional $15 but if you pay online, you can get it for $10). And while that sounds steep, the gardens are a labor of love and require a lot of upkeep.

If you’re a Dallas local, I highly recommend becoming a member (it saves so much money).

One of my favorite parks in Dallas doesn’t have an official name. I think it’s an office park (not sure) but it’s right next to the Ann & Gabriel Barbier-Mueller Museum (one of the most underrated free museums in Dallas), which is how Vyas and I first discovered it.

Now, we just refer to it as “Samurai Park”. The park has nothing to do with samurai (apart from the fact that it’s next to a samurai museum). Samurai Park just sounded cool (so we call it that for convenience).

At the park, you’ll find an old moss-covered fountain, clean-cut terraced steps, spills of flowers, and a chessboard with knee-high pieces (though several of the knights are missing).

With the overflow of soft music playing from the restaurant next-door, it’s a great place to relax on a date night.

In more ways than one, Thanks-Giving Square is one of the most beautiful parks in Dallas. It’s a place to reflect and introspect, a slice of calm underneath busy streets.

Through little details, Thanks-Giving Square weaves the idea that all religions share a thread of gratitude. Told through the eyes of different cultures, the quotes, scattered throughout the area, follow the park’s secular mainframe.

There are teal chairs and flowers and a waterfall in between the small walking path from the Ring to the Chapel.

Right outside on the golden arch is a message.

“Step slowly into the Ring of Thanks, grateful for blessings received.”

Did you enjoy this post on the best park in Dallas? What are your favorite parks in Dallas? Let me know in the comments below! 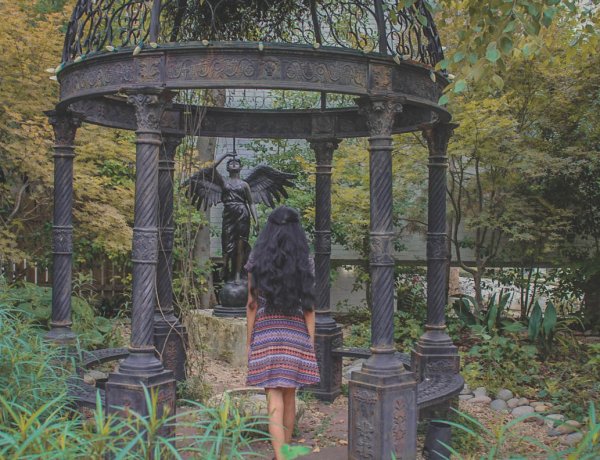 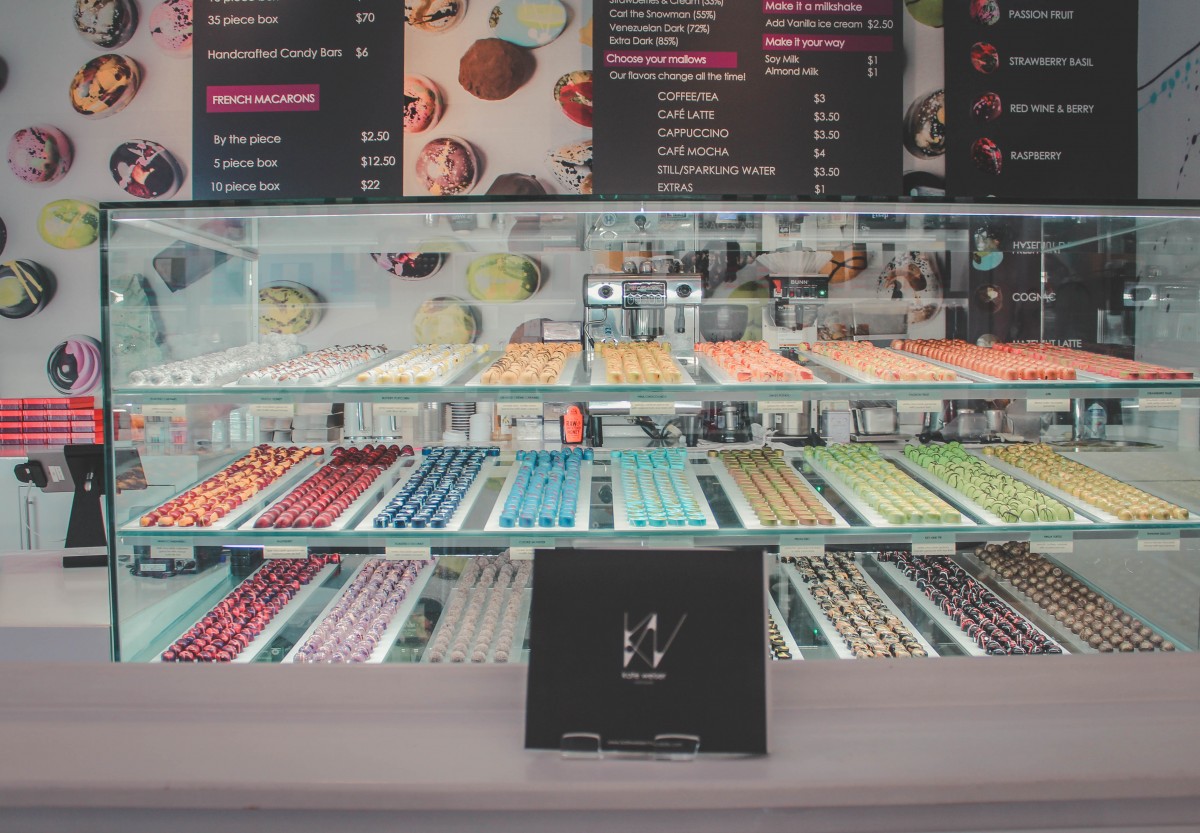 The Best Chocolate In Dallas (A Local Guide) 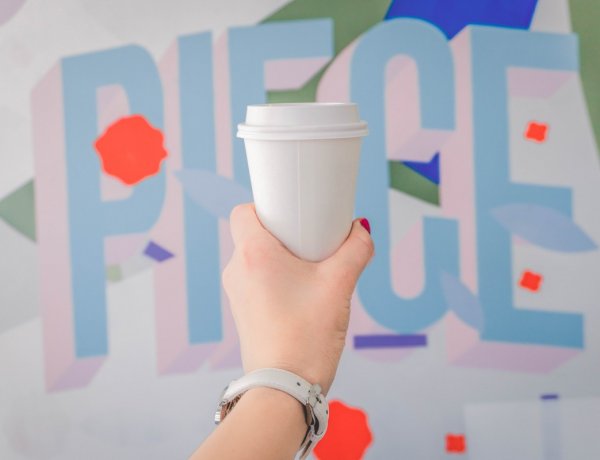