10 Atmospheric Dark Academia Movies (And Where To Stream Them)

dark academia movies and where to watch them

The rules of dark academia season are simple: chase learning. Chase learning in big, old libraries and cozy, little coffee shops. Chase your dreams and goals and ambitions with your heart and head and soul. And if you need a break, take it. Be kind to yourself.

These atmospheric dark academia movies remind us to do that. They are visibly in tune with the dark academia aesthetic, but also aren’t afraid to challenge it. The theme here: learn for yourself, not for anyone else.

Dead Poets Society isn’t just one of the best dark academia films of all time, it’s one of the best films of all time (in my completely biased opinion). Robin Williams plays John Keating, a compassionate and unconventional poetry teacher who opts to inspire and encourage instead of pressurize and constrain. Dead Poets Society is a heartbreaking, moving story that portrays the influence teachers have through powerful, demonstrative scenes.

Watch On Amazon
Watch On Disney+

When a movie’s costume design is helmed by Academy Award nominated Christopher Peterson, you know the outfits are going to be on-point. So unsurprisingly, Kill Your Darlings is peak dark academia: rib-knit vests, collared shirts, plaid ties, long coats. Its layered look strengthens hotblooded depictions of early Beat Generation artists (including Allen Ginsberg and Lucien Carr, whom the story follows). Kill Your Darlings is the story of obsession, uncertainty, and creativity. And it’s undeniably dark academia in its scenes, score, style, and script.

The Professor And The Madman

From its Oxford setting to its dictionary-centered plot, The Professor And The Madman is wholly dark academia. Mel Gibson and Sean Penn deliver brilliant, striking, nuanced performances. And the story is told with so much heart (I went through a whole box of tissues and tub of ice-cream while watching it). It’s a touching period piece rooted in redemption, friendship, and empathy.

Next up on this list of dark academia movies is a biopic that draws out Tolkien’s early life through a cinematic Oxford presence, a secret society (The Tea Club and Barrovian Society), and a frenzy of writing scenes. I still want to read LOTR before watching Tolkien (not a prerequisite by any means, just a personal goal of mine), but I have a feeling I’m going to really enjoy this movie once I get to it (the way it’s directed reminds me of The Imitation Game).

Watch On Amazon
Watch On Disney+

Speaking of The Imitation Game, this is easily one of the best movies (not just dark academia movies) I have ever seen. There’s a reason The Imitation Game got eight nominations at the 87th Academy Awards. It’s cinematic perfection. Each scene encompassing Alan Turing’s race to decrypt Enigma messages is flawlessly shot. The pace is seamless, the acting is resonant, and the dialogue is propulsive (can you tell how much I love this movie?). The score, composed by Alexandre Desplat and recorded by London Symphony Orchestra, is also one of my favorites of all time (I often listen to it whilst writing). If you’re an engineer (or mathematician or computer scientist) who loves the dark academia aesthetic, watch this movie.

Few dark academia movies shine a spotlight on women, but Mary Shelley does. It’s directed by the talented Haifaa al-Mansour, Saudi’s first female filmmaker, and as a result, is delightfully and daringly feminist. Mary Shelley focuses on the inception of Frankenstein and the raw, human behavior that bleeds from the Shelley’s observations into her text. Although the storytelling feels restrained (an unfortunate foundation for a movie centered around a well-loved author), the gothic atmosphere is rich and heavy, making this the perfect rainy day stream.

3 Idiots is a movie I recently watched with my partner (this is his favorite movie of all time – I can’t believe it took me so long to finally see it). The story centers around a group of engineering students at a college in India. Rancho, one of “three idiots”, brazenly challenges strict, browbeating professors in an effort to reveal the close-mindedness of his university’s program. Even though I didn’t click with the humor and songs, 3 Idiot’s message is clear, brilliantly-executed, and topical (no amount of juvenile comedy can detract from it). It’s a fantastic, must-watch dark academia movie that destabilizes our ingrained narratives about learning.

Watch On Amazon
Watch On Netflix
Watch On yOUtuBE

Les Choristes is perfect for fans of Dead Poets Society. This cult classic French film has a familiar plot (a nurturing teacher brings a heartwarming dose of hope and change through the arts). But let’s be real, it’s one I will never tire of. The music in Les Choristes is gripping; a chilling blend of voices will touch and pierce your soul. If you’re looking for foreign dark academia movies, I highly recommend watching this one!

Somehow, within two hours, The Social Network depicts everything wrong with dark academia: toxic masculinity, obsessive work habits, insolent Ivy League dynamics. What happens when you take your passions too far? Who do you hurt along the way? The Social Network is a modern movie, yes, but it also feels scarily dark academia. Aaron Sorkin is the screenwriter behind this film, so expect it to be (almost) completely dialogue-driven. The Social Network is filled with fast-paced lines and testy quips and heated assertions that unpack each character’s ambitions and ethos and motivations. You’ll get a feel for the why behind Facebook.

Watch On Amazon
Watch On Hulu

The Fall Of The House Of Crockett

McDonald And Dodds is one of my favorite shows. It’s a fresh, sharp, cleverly-plotted Britbox original that relies on the banter and crime-solving abilities of outgoing, ex-Londoner DCI Lauren McDonald and quirky, introverted DS Dodds. The Fall Of The House Of Crocket (episode one, which was originally shot as a film) introduces us to the duo and lays the groundwork for the fall of entrepreneur Max Crockett’s Bath-and-beyond business empire. If you like cozy mysteries and are a fan of dark academia, be warned: this is an addictive series.

Watch On Amazon
Watch On Britbox

If you’ve already watched all the dark academia movies on this list, here are a few more rapid-fire recommendations!

Did you find this list of dark academia movies useful? What are your favorite dark academia films? Let me know in the comments below! I’m always searching for more recommendations. 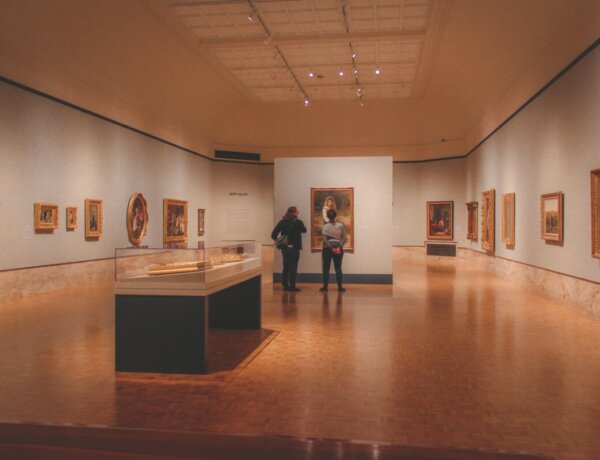 The Only Guide To A Museum Date You’ll Ever Need