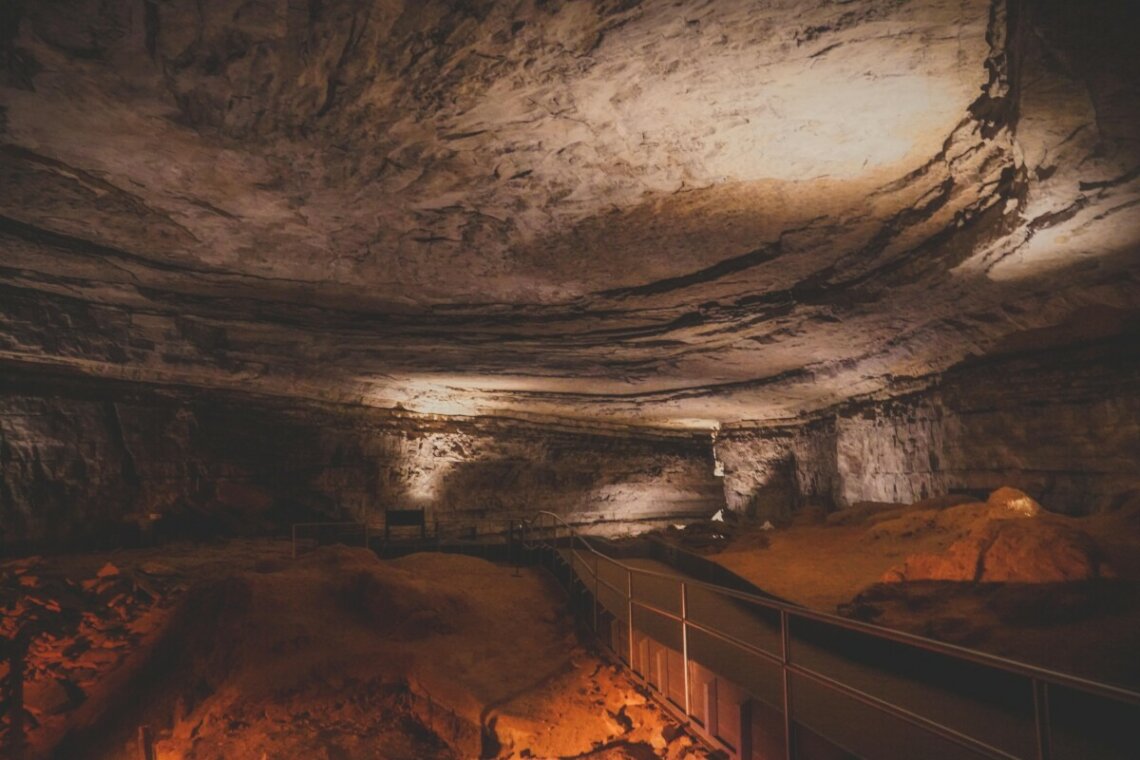 In the beginning of autumn, I went on my first Mammoth Cave tour. I sat – legs pressed tight against a bench, feet clacking the ground – under the wide awning of Shelter A, waiting for a ranger to herd me (and a hundred or so other tourists) into the belly of the longest cave in the world. We walked and walked and walked some more. We climbed up and down thin, platformed stairs. We paused and gasped as the cave curved and snarled and dropped and twisted. Mammoth Cave’s pathways are serpentine; its walls are textured. And I was enamored by it all.

I returned to Mammoth Cave National Park often after, each time with the intention of taking one guided trip (sometimes two, much to the misery of my calves) through the cave itself. On those ranger-led tours, I chatted with travelers and staff, die-hard cave lovers and new-to-the-cave-scene visitors. Tour-by-tour, I fell deeper and deeper in love with Kentucky’s karst landscape.

Now, having been on almost all the Mammoth Cave tours (with the exception of their crawling tours), I feel ready to share my favorites.

Editor’s Note: Mammoth Cave tours are seasonal and not necessarily offered year-round. Sometimes tours close for construction (I recently heard from a ranger that some of my favorite mammoth cave tours will be closing soon due to this very reason. The goal is for many of the paths to be more accessible in the future). The best place to check what tours are available right now is the National Park website (I’ll link it here). I also tried to include a list of phobia warnings based on my own personal experiences on each of the cave tours. If you experience any cave-triggered phobias, I highly recommend talking with one of the rangers at Mammoth Cave National Park (you can reach them at 270-758-2180) before booking a tour. They can help you decide which tour (if any) might suit you best!

Mammoth Cave has long been a place for the curious. Even before it became integrated into the National Park system in 1941, tours were being led down and through its hidden alleys and layered passageways. The Historic Tour is the oldest, continually operated tour at Mammoth Cave. It’s also the most popular.

Go for the atmosphere: the gaping, moss-laden Historic Entrance; the vaulted, limestone ceilings; the remnants of 19th century century saltpetre vats. Go for the route too. You’ll stroll through wide and thin areas of Mammoth Cave. You’ll pass a coffin-shaped rock that looks like it’s been plucked from the pages of an old vampire novel. You’ll duck and twist and shimmy through Fat Man’s Misery (though I’d personally call this portion of the cave Anybody’s Misery). And by the end of your tour, you’ll be left with no doubts as to how Mammoth Cave got its name.

Quick, short, and low-in-effort, The Frozen Niagara tour is hands-down the easiest tour offered at Mammoth Cave National Park. Don’t be fooled by the sketchy looking entryway: this is one of the most beautiful sections of Mammoth Cave. Within a small, dark, fourth-of-a-mile stretch, you’ll see wrangled beards of limestone, spirals of stalactites, and ice-like distortions of flowstone. Your tour guide will brief you on the geology of Mammoth Cave, the story behind the Frozen Niagara entrance, and some of the keystone species you might see at Mammoth Cave National Park (this part of the cavern is usually crawling with cave crickets).

The Cleaveland Avenue Tour is one of the most underrated Mammoth Cave tours. If you’re visiting Mammoth Cave for the first time and want to get a feel for the length of Mammoth Cave without the stress of a large group size, this is the tour I’d recommend the most! Be warned: there are lots of steps up front and towards the end. But the path in-between is nice and gentle and compact. It’s a hike that’s strenuous in bursts, more tiring than difficult. And the reward is floral gypsum, white petals of calcium sulfate that choke cracks and crevices. You’ll amble and ramble and snap photos. And as you stroll through Cleaveland Avenue, your tour guide will introduce you to Mammoth Cave’s geology, topology, and history.

The Grand Avenue Tour is intense. It’s stair after stair, incline after incline. You’ll trek through sparkling passageways and squeeze into slot canyons and amble past rich tapestries of flowstone. You’ll experience Mammoth Cave to the fullest – its highs and lows, its dimness and darkness, its emptiness and too-muchness. Grand Avenue’s variation alone it makes it one of the best mammoth cave tours, but it’s also one of the most difficult. The pace tends to be slow and unhurried (there are even restroom breaks) to accommodate, but the length will absolutely test your legs. This tour is long. You’ll spend half-a-day in a cool, dark, seemingly endless underground. At times, the landscape will feel (and look) hellish. But if you love caves and enjoy Stairmaster challenges, you’ll feel right at home in this tour.

Whilst at Mammoth Cave National Park, I tried asking as many park rangers as I could find what their favorite tour was. The overwhelming response? The Violet City Lantern Tour. This is one the most dramatic Mammoth Cave tours. Here’s what I love about it: Violet City swoops you back in time to an era of early exploration, an era where your eyes depended on the soft, intimate glow of lantern-light. So as you hold up your lantern to Mammoth Cave’s water-cut nooks and crannies, you’ll tap into the past. But you’ll also focus on the little details – the here-and-now, the what-was and what-could-be.

One of my favorite Mammoth Cave tours was the Gothic Avenue Tour (which to me felt a lot like The Historic Tour without the severe claustrophobia moments). The Gothic Avenue tour is dark and moody. It’s theatrical in its form and shape. Spheres of light are cast onto historic graffiti burned into Mammoth Cave’s walls. Monuments (old Jenga-ed stacks of rocks) are strewn along the edge of the trails. You’ll see broody stalactites and stalagmites droop down below blackened shadows. You’ll crescent moon around a dramatic ring of formations (known as The Bridal Altar), which devilishly drips down to hard, compact ground. The atmosphere of Gothic Avenue is gloomy and eerie. Go in October if you can (this is the perfect tour to take during spooky season).

I was told by a park ranger that the River Styx Tour is often touted as one of the most underwhelming tours at Mammoth Cave. “It’s because people expect to go down to the water,” he said. And while you do see water on the River Styx tour, you see it from above. You catch a small glimpse of it (just a glimpse). Know that this is less of a river tour, and mostly a mashup of many other Mammoth Cave tours. The River Styx trek (which is slick and muddy and wet in some areas) covers the entire Historic Route (truth be told, I was not looking forward to walking through Fat Man’s Misery again). It also injects some elements of the Violet City Lantern Tour and the Mammoth Passage Tour.

Like Frozen Niagara, Domes & Dripstones walks you through some of the prettiest sections of Mammoth Cave. It’s a lot more strenuous than Frozen Niagara though (according to the ranger who led our tour, this is the hike he’s seen the most people end up in need of medical evacuation – eeeep). And after negotiating the steps past the entrance, I could see why. On the Domes & Dripstones tour, you knock out 280 stairs in the initial descent. The steps get smaller and smaller as you go farther and farther down. At the choke points, my feet were barely covered by the stairs. But wow, oh wow, once the stairs taper off, you’ll see one of the most beautiful sides to Mammoth Cave. This portion of Mammoth Cave isn’t dry and clean-cut. It’s moist and layered and filled with formations.

Side Note: I definitely felt like I gained the most knowledge from this tour. There were two ranger-led “Ask Me Anything” moments where our group got an opportunity to sit down on a handful of benches (arranged classroom-style right in the cave) and shoot questions. Y’all, I learned so much from the open-ended style of these portions, so if you’re looking to grasp more of the history and geology of Mammoth Cave, I highly recommend this tour!

For a quick in-then-out jaunt into Mammoth Cave, opt for the self-guided tour. You still need a ticket, but once you’ve strode down past the Historic Entrance, you can walk around and read the placards at your own pace. This is a popular option for those planning a last-minute stopover at Mammoth Cave.

The self-guided tour showcases a large, wide open, level snapshot of Mammoth Cave, making it more accessible to people who might experience claustrophobia, acrophobia, and agoraphobia. There is a guided version of this tour too (The Mammoth Passage Tour), but if you get a chance, try booking one of the other Mammoth Cave tours on this list instead (for a more in-depth Mammoth Cave experience)!

While I do not intend on going on any of the crawling tours at Mammoth Cave (I looked at one of the holes you have to squeeze whilst on another tour and no, just no), I do still want to mention one crawling tour in this guide. Here’s why: everyone I spoke to who has done the Wild Cave Tour in the past has absolutely loved it. Apparently, you crawl on your hands and knees and push your body through small gaps in the ground. You don’t just get to see Mammoth Cave, you get to feel it. The Wild Cave tour offers a tactile way to experience Mammoth Cave. It’s supposed to be fun and challenging and adventurous.

Did you find this guide to the best Mammoth Cave tours helpful? Do you have any questions? Let me know in the comments below! As always, I love hearing from you.